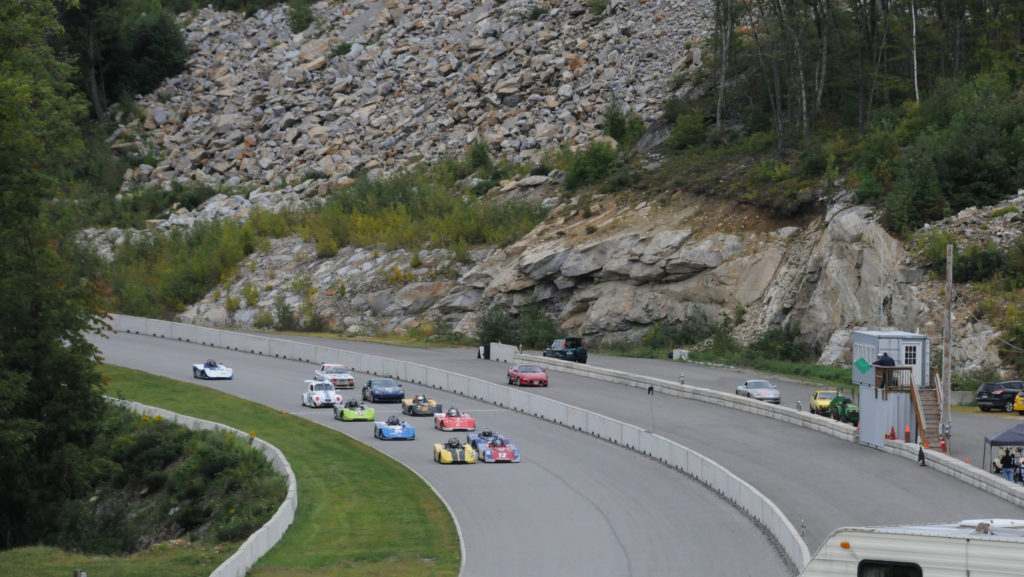 Over two weekends, September 8-9 and September 20-23, the New England Region hosted 3 Racing Against Leukemia events to raise funds for the UMass Memorial Children’s Hospital. The weekends were a huge success, and the region is proud to announce that over $9000 was raised between donations, t-shirt sales, and the annual RAL Raffles and fundraisers at the rally and road racing events at Palmer Motorsports Park and the Solo event at Devens Airfield, as well as cash donations made directly to the FirstGiving site.

This is how the numbers break down: 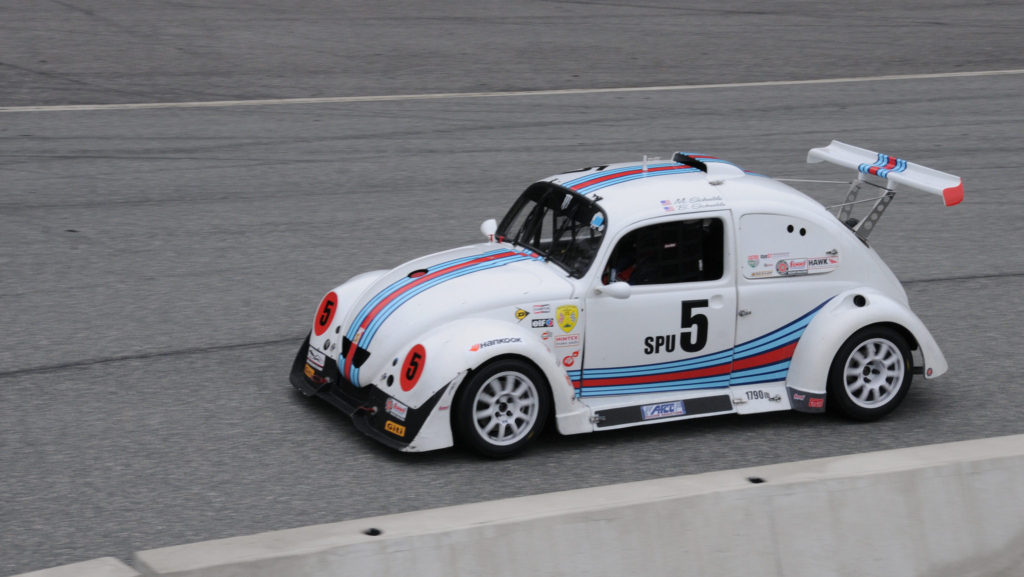 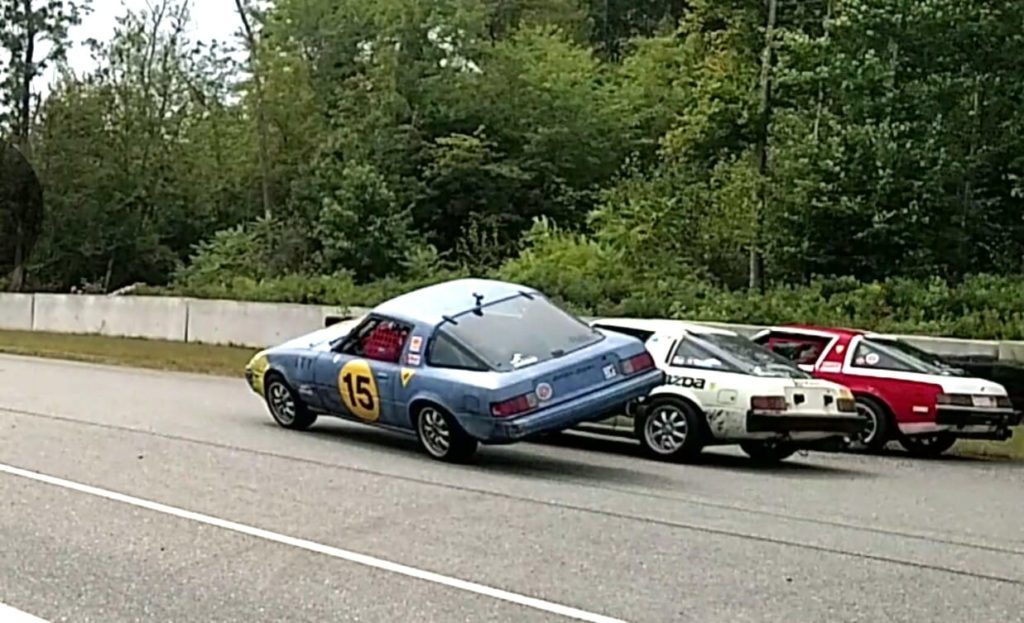 Almost 100 cars showed up for a beautiful weekend of racing at Palmer Motorsports Park for the annual Pig Roast/NERRC road racing event. There was plenty of wheel-to-wheel action, including one wheel-off-the-ground moment when three IT7 drivers gave the grid workers and all the spectators up on the hill quiet an eye full as they took turn 1. The #21 Mazda RX-7 driven by Dave Patten tried to get control and stay on track exiting the turn, while #15 Dick Patullo and #47 Anthony Parker come together, leaving Dick’s car with not all four wheels on the ground.

But the true tale of the weekend was watching track record after track record fall to faster drivers and times. The cooler weather and clear skies provided ideal race conditions for NINE classes to have new records set when it was all over and done.

Full results from the weekend can be found here. 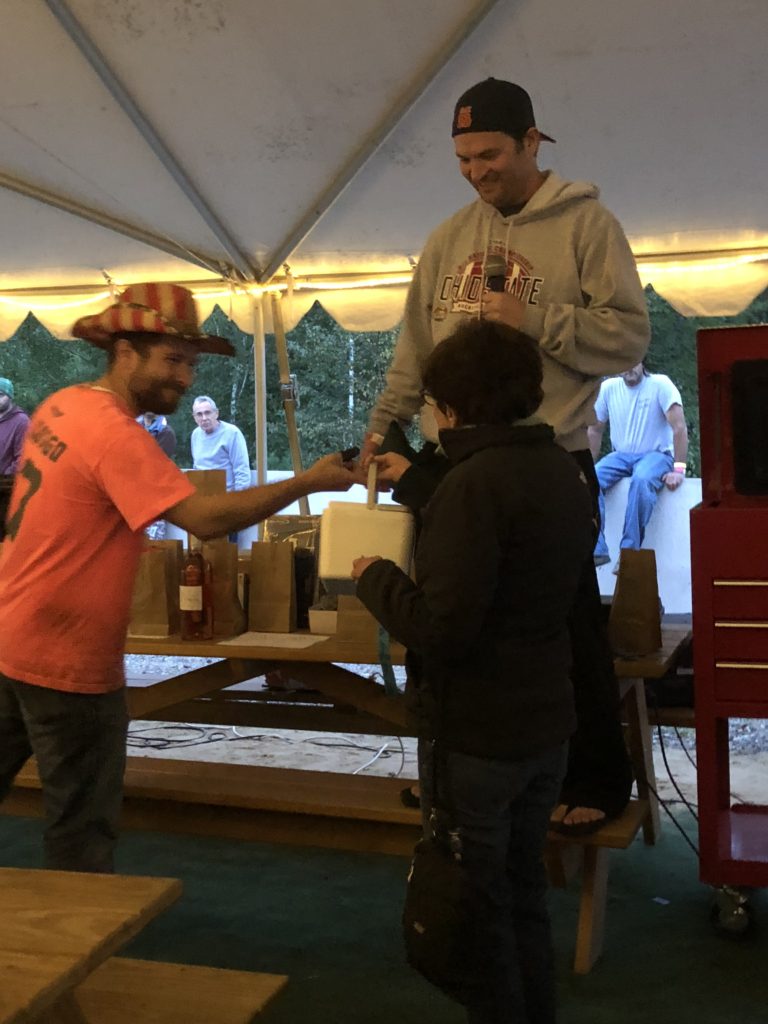 The annual raffle was held Saturday night at the worker and driver party under the tent in the paddocks. More than two dozen items were donated from members to be auctioned off in support of the hospital. From small items like tools and racing socks, to larger items such a Patriots pop-up canopies and a Snap-On cooler, Brian Rogers did a fabulous job hosting the raffle.

Members were able to purchase tickets over the course of the weekend, and then place them in the raffle bags of the items they hoped to win. As we all anxiously watched, Brian pulled each winning ticket number to announce the winner.

There was plenty of laughs and excitement under the tent lights as workers and drivers checked their tickets for the winning numbers and one-by-one the booty was awarded out. 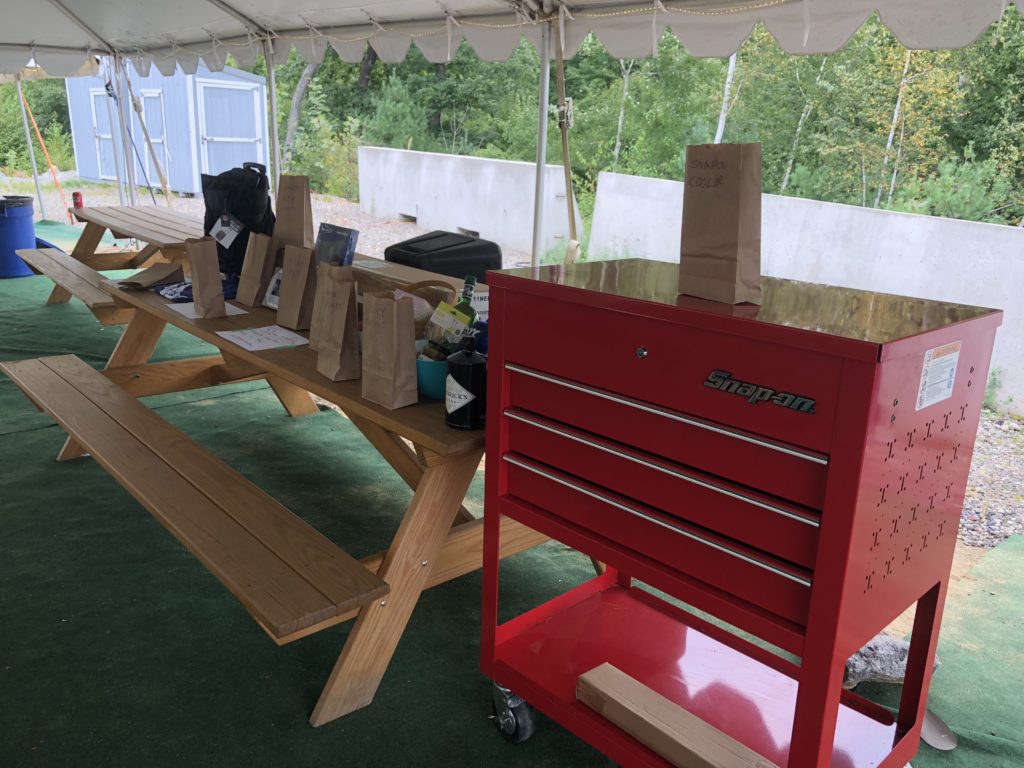 One of the most desirable auction items up that night was the Massachusetts SCCA personalized vanity plate.

A long time ago, these plates were originally ordered from the state of Massachusetts by Floyd Stone, former Executive Steward and a significant contributor to the region. Legend has it that he sat on the bulldozer and directed it as it carved out of a gravel pit the track at Bryar (which we now know as New Hampshire Motor Speedway). Floyd eventually transferred the license plate to Phil Gott and Joanna Ellis for their service to the region. It has appeared on various Gott cars in the decades since then.

The Gotts offered up the plate this year for the RAL raffle. After bidding over the course of two weekends – at Palmer’s road racing and rally events, and then the Solo weekend at Devens – Craig Swinehart, a long time NER member, emerged with the highest bid to take home the coveted plates. With a winning bid of $675, Craig and Wendy Swinehart earned the honors as the top donors in the 2018 Race Against Leukemia weekends.

This iconic plate now resides on the back of Craig’s silver Porsche. 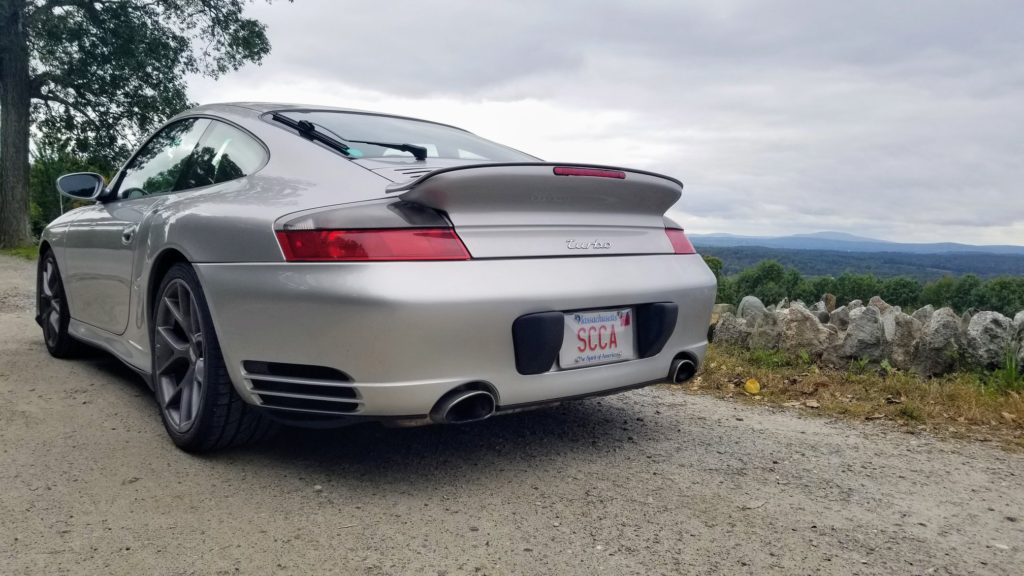 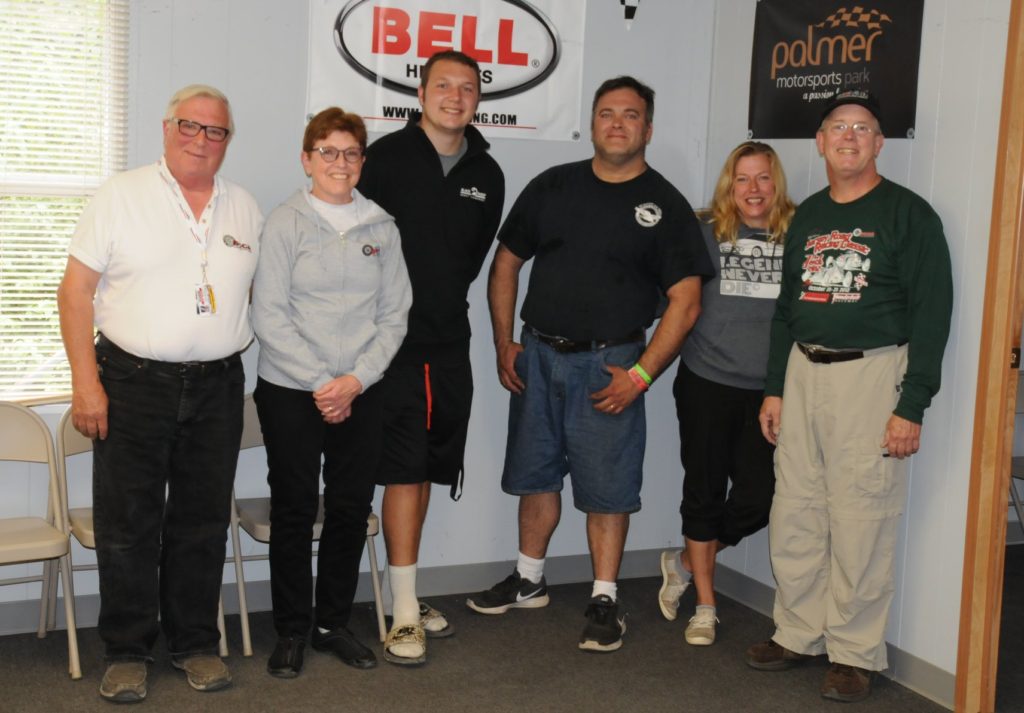 Please congratulate the following drivers on completing the CRE!

A huge group of drivers, including many that were recently in Lincoln for the Solo Nationals, showed up at Devers Airfield on Saturday, September 23 for the Solo portion of the RAL activities. Unlike the pouring rain these autocrossers are used to enduring this season, they also were blessed with beautiful weather, perfect for the day’s activities.

James Ray attended and took a ton of photos of all the competition. His Flickr account has all the highlights, drivers are welcome to view.

Final results are posted here on Pit Talk as well. 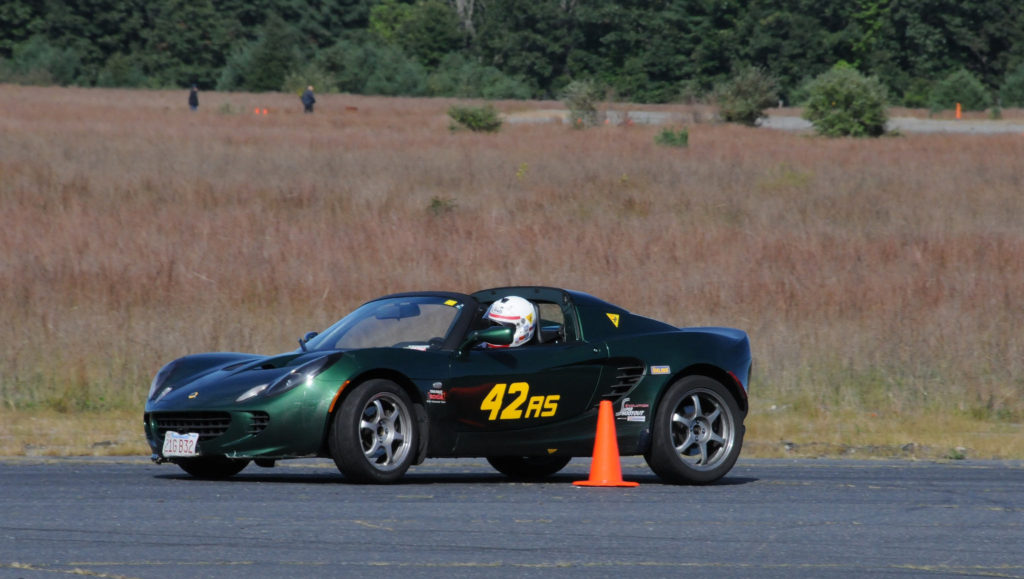 The Reason for RAL

As motorsports enthusiasts, we all love the hard-core racing action. But the RAL weekends are special for a different reason. Many of our NER family have and currently are battling cancer. The funds we raised go directly to supporting the UMass Medical Center and provide much needed resources to help those battling childhood cancers. As a region, we are so proud that we can come together to help bring smiles and support to those families. If you haven’t already, check out our visit to UMass last month and get a look at some of the big grins on the children’s faces from our visit. That is why we do this every year.

$9000 is a huge amount of money. Thank you to every NER member that contributed and supported the program this year.