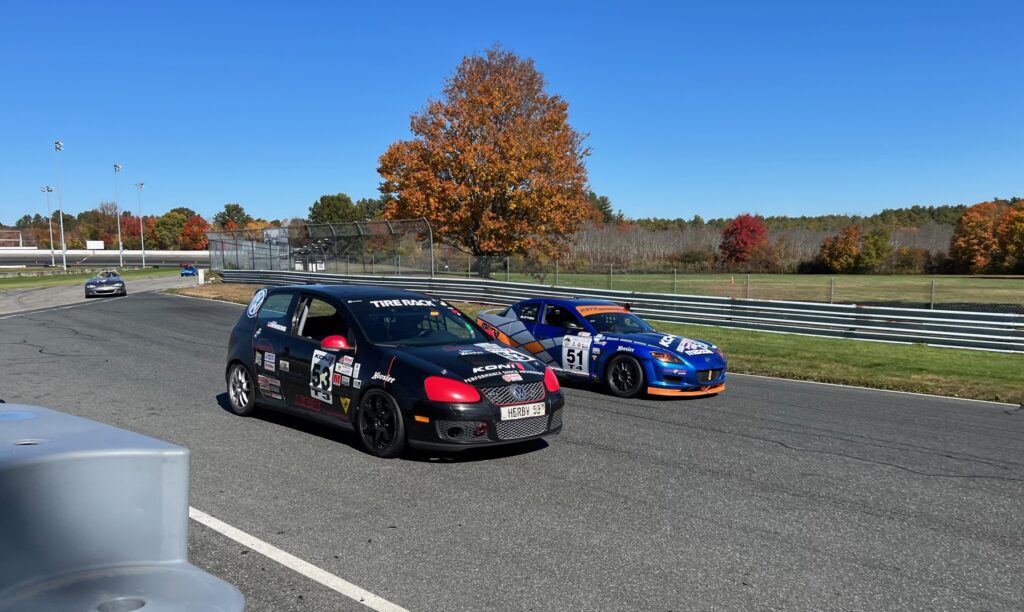 Championships Season On The Line

Heading into the final New England Road Racing Championship weekend of the 2022 season, there were at least 7 races where the battles would be intense as the finishing positions would determine who stayed atop the leader board, or who might usurp the current leader and snatch away a title at the very end.

The drivers and teams at Thompson Speedway for the weekend did not disappoint. After rainy conditions on Friday, Saturday’s clear blue skies and cooler weather proved the ideal conditions for some fabulous, wheel-to-wheel racing.

Almost every race throughout the day had battles to watch. Some for the P1 spot, and some in the middle of the pack. These competitors left it all on the track and gave the crew, workers and spectators a ton of great racing to enjoy as we ended our regional road racing season.

As highlighted in our “what to watch” preview, the races for FV, SM, SM2, STL, T3, GT2 and IT7 lived up to the hype. David Grimes held the lead in FV, but Chris Barry was not going to let him just walk away with it. The FV races had multiple leader changes, as Grimes, Barry, and long-time driver John Petillo fought it out. Saturday’s afternoon race finished Dave, Gerard, Chris as 1-2-3. Then on Sunday, John showed up and took the first place spot, with Chris in 2nd and Dave down to 3rd. It would all come down to the double-points final race, where after slipping back to fourth halfway through, Dave battled back to reclaim the lead and finish first. That should secure him enough points for the Championship title.

For the SM and SM2 races, Christian Sarnecki proved he can tear up a track with his #44. He dominated his classes and was wild to watch as he sped away with the wins in his groups. In GT2, Darias Trinka and Matthew Morin, neither vying for a title, still made the ground pounders races fun to watch. Saturday morning’s race finished with just 0.135 seconds difference between the two cars.

Joining us for the final event was the Historic Racing Group. Always fun to see these classic racers on the track. An engine failure and oil spill on lap 1 meant the Saturday morning race was just five laps under yellow before it was called for lunch. But the drivers wrapped up the weekend with a full race as group 7 to bring a checker to the 2022 season.

The points are now being tallied to determine the final results for the season NERRC Winners. Stay tuned and those will be announced as soon as they are available.

James Ray was on site taking pictures throughout the weekend. As always, visit James’ Flikr account to check out his images.