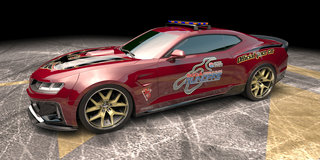 TOPEKA, Kan. (Sept. 24, 2018) — Trans Am® and the National Championship Runoffs® are two iconic, U.S. motorsport entities distinctly linked to the Sports Car Club of America®. That is why it’s outrageously appropriate that two 1,000-horsepower Trans Am 455 Super Duty vehicles, built by Trans Am Worldwide, will be deployed as the Official Pace Cars of the 2018 Runoffs taking place Oct. 16-21 at Sonoma Raceway in California.

The cars will lead competitors around Sonoma Raceway’s 12-turn, 2.52-mile circuit to begin each of the 24 races deciding this year’s 28 different national champions. Mike Cobb, SCCA’s President and CEO, noted the two limited-edition vehicles will also make on-track appearances throughout test and qualifying days, as well as be available for ogling in the race paddock when not in use.

“Trans Am holds a special place in SCCA history, so it’s extremely fitting for offspring of that legendary race series to lead the way this year at the 55th running of the National Championship Runoffs at Sonoma Raceway,” Cobb said. “Personally, I can’t wait to hear those majestic, 1,000-horsepower machines muscle their way through the hills of wine country. It’s going to be epic.”

The Trans Am 455 Super Duty is a refined beast, with an interior featuring retro leather seats, refaced retro gauges, shifter, and custom embroidery, and an exterior boasting full-carbon details including the iconic shaker scoop. For those with a love of power and speed, the Trans Am 455 Super Duty comes with a lot of grunt in the form of 1,046 ft-lb of torque. Trans Am Worldwide Co-Founder Tod Warmack said that performance is the result of a collaboration with premier NASCAR engine builder Joey Arrington of North Carolina. Each car comes standard with a proprietorial engineered 455ci DI Motor, 2.9-liter Whipple Supercharger, upgraded fuel system, cold air intake, ceramic coated headers, three-inch exhaust with sport tips and an upgraded performance differential, Brembo Brakes and suspension.

“The Trans Am 455 Super Duty features sleek body lines with masculine proportions and traditional retro styling,” Warmack said. “But perhaps the most notable of this historical accomplishment is that we now join the ranks of only an exclusive few who offer a 1,000-horsepower performance package in a production vehicle.”

Founded by brothers Tod and Scott Warmack along with Jim Dowling, Trans Am Worldwide collaborated with graphic designer Kevin Morgan to bring to life the vision of a modern-day Trans Am. To that end, the team secured exclusive rights to the Trans Am brand though SCCA and began to build cars for the public. The design has seen several refinements since the first prototype was produced. But it didn’t take long before demand outweighed supply and so came the time to transition from a small custom shop to a full production facility. Today, the company still has a passion for new and the classic Trans Am vehicles, but also converts restro-mods and restores classics, as well as offers new technology muscle cars with a classic retro look.

The SCCA National Championship Runoffs has evolved into what is now commonly agreed to be the pinnacle of American motorsports. Since 1964, the SCCA has crowned Road Racing’s National Champions at the winner-take-all, single race Runoffs format through dozens of separate races over three days.  As host of the 55th Runoffs, Sonoma Raceway becomes only the third California track to host SCCA’s National Championship, joining Riverside International Raceway and WeatherTech Raceway Laguna Seca. Spectator tickets for the 2018 Runoffs are on sale now at http://www.sonomaraceway.com/events/scca-national-championship-runoffs/.

The Sports Car Club of America®, Inc., founded in 1944, is a 67,500-member motorsports organization that incorporates all facets of autocross, rally and road racing at both Club and professional levels. With headquarters in Topeka, Kansas, the SCCA annually sanctions over 2,000 events through its 116 Regions and subsidiary divisions. Much of the SCCA’s activities are made possible with support from the following Official Partners: Chevrolet, the Official Truck of the SCCA; Hawk Performance, the Official Brake Products of SCCA; Mobil 1, the Official Oil of SCCA; Sunoco, the Official Fuel of SCCA; and Tire Rack, the Official Tire Retailer of SCCA. To learn more, please visit www.scca.com.

Photo: Digital mock-up of 1,000-horsepower Trans Am 455 Super Duty that will serve as a pace car at the 2018 SCCA National Championship Runoffs taking place at Sonoma Raceway.

Artwork courtesy of Trans Am Worldwide

About the Author: SCCA Contributor