Rally Cross of the Little Pines

Picture this: You are a member of the Ahern family that has owned the Glove Hollow Farm since 1897, the same year Henry Ford applied for a patent on a carburetor. You get a phone call from some crazy with the NER Rallycross team, “Can we use your open field for a rally cross site?” Well, our farm flooded in 2011 with tropical storm Irene. Ninety percent of the farm was under water, 12 feet of water at its highest point. How much mayhem can rally cross cause if a flood didn’t put us out of business….?

I don’t know what a perfect day of rally cross looks like, but this first event at Glove Hollow Christmas Tree Farm in Plymouth, NH had to be close. Perfect, unseasonably warm weather, a sky painted by God Almighty with a fun course in soft, but not too soft, dirt—all were in the offering. This new venue is nestled in a few gentle mountains bordered with lakes. Absolutely beautiful and judging from the conversations in grid and paddock everyone was enthralled. Easy access to paddock with the grid area close by meant Cliff was even more efficient running grid. The cars tried to find rocks, but the course was rock free for the duration of the event. Not having to dodge rocks and worrying about our oil pans was a plus. Really an ideal spot, food and services were close by, as was access to the highway. Those close by, please buy your Christmas trees at Glove Hollow Christmas Tree Farm and tell them NER Rallycross is the reason you are there! 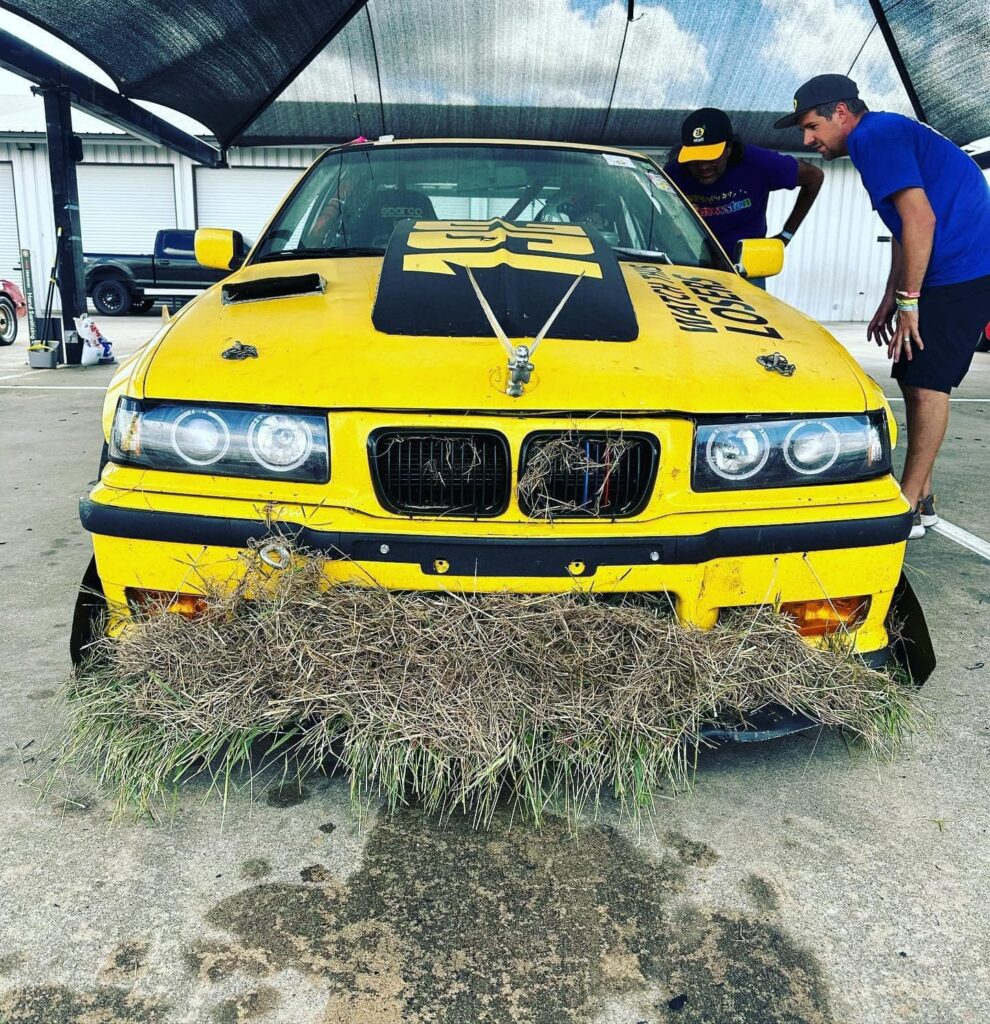 With most of the regular cars coming out to play, a few cars were the stars of the show.

A 1981 Ford Fairmont with a turbo swapped LS motor being a fan favorite, a Bowler Bulldog was also on display. Not to be outdone, the classic RHD Austin Mini was in the running for most smiles per view. Kathy Moody decided to go to the dark side of American Muscle driving George Farrar’s Ford Mustang and kicking up some impressive dirt showers. Ask George about the dirt deposited in his back seat. Always great to see a classic VW Bug, especially great is how its driver, Jason Leaming, has resurrected it and turned it into a potent rallycrosser.

Child labor laws might have been stretched when Zander Beliveau was pressed into service as a starter. No one was sure who had more fun, him launching the cars, or the drivers watching him shout, “GO!”?

Course workers were entertained (and distracted) by the number of cars shedding parts during the event. A few Subaru’s ended without parts, while a few, against all odds, kept grilles and spoilers attached. Rooster tails were abundant, but Cliff Kangas was especially impressive. Cliff tried to take out the finish cones but amazingly was able to back up and not DNF the course. The photographer and spotter had the best view. Cliff was especially generous with giving them a dirt shower and bite sized dirt treats.

The counterclockwise course became more challenging as the day (and field) wore on. During the parade lap, most of us were amazed at how bumpy the course was, but at speed, the course smoothed out. The hair pin at the back of the field was fun and challenging. It became especially challenging after Jeff Bakken and Steve Beliveau threw the Ford Raptor through the turn. Dan Mayer in the Bowler Bulldog finished what they started.

Rail cars traveling on the close by train tracks were an added visual bonus. The weather remained perfect with just the right amount of cloud cover. Competition remained tight throughout the day. Cliff Kangas was upset his Mustang-style finish helped Emmanuel Cecchet take top score of the day.

Glove Hollow Christmas Tree Farm is a new site for NER, and we are all hoping we will be asked back. Big thanks to Scott Carlson for spending 7 (seven) hours smoothing out the field after the event! Thanks to all workers and especially the leadership of the club for putting on another great event.