Skip to content
Home|Autocross, Featured|Go for the competition. Stay for the family. #2019SoloNationals
Previous Next

Go for the competition. Stay for the family. #2019SoloNationals 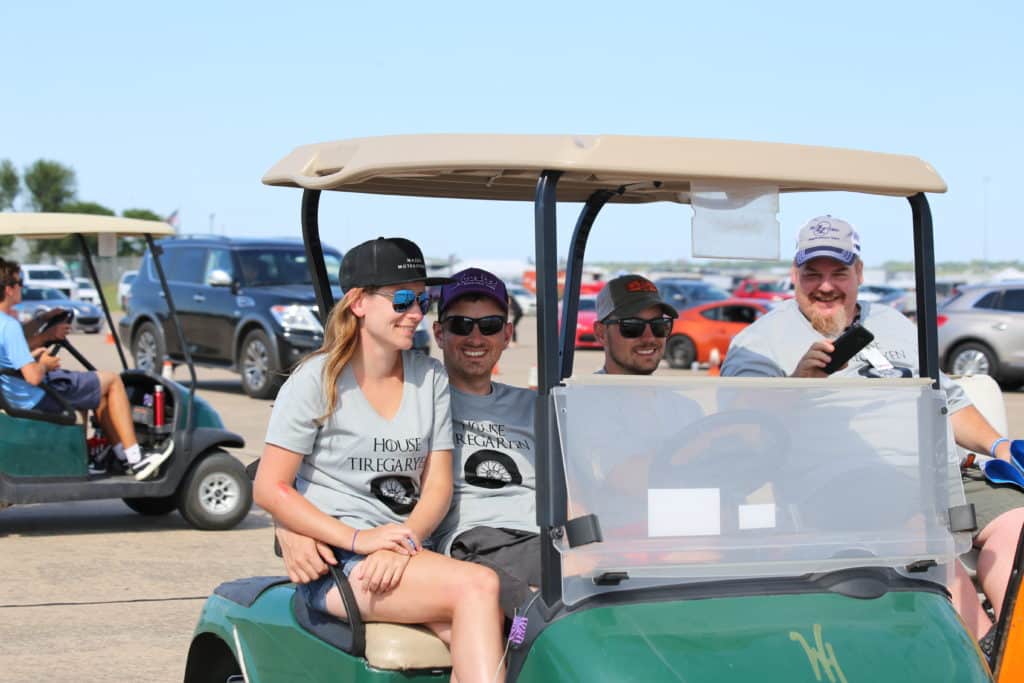 There’s a saying at Nat’s, “We come for the competition, we stay for the family.” And this sums it up beautifully.

People often question my sanity. Those who know me will understand that. But for the past couple of years it happens much more frequently around the first week in September. The reason: SCCA Solo National Championships. Even some of my fellow autocrossers wonder why any sane person would choose to drive 3,000 miles to run for about six minutes of autocross competition. But what’s noticeable is that none of the people wondering this are people who have made this pilgrimage themselves.

Now you might imagine that all the others who trek to Nationals are also of diminished sanity. But I would like to assure you they are not. I would like to … but I cannot. Nevertheless, this year New England Region sent the largest contingent in the country to the National Championships – 63 in total. Clearly there’s something in the water in New England affecting our sanity.

There’s a saying at Nat’s, “We come for the competition, we stay for the family.” And this sums it up beautifully. The competition on this national stage is significantly higher than in regional events. Of course you’d expect that from any event that brings together the top drivers from regions all across the USA and pits them against each other over the course of a week.

This was my second Nationals and also the second for my team partner in Autocross and life, Sue. We’re not the fastest drivers in our region by a long shot. On a good day we can be competitive, but we’re certainly not on a par with our region’s top drivers. So why go if we have little chance of winning? After our first trip in 2018, we were hooked. So Let me try to explain our annual absence of sanity (because it’s always a joint decision).

The course design at Nationals is unlike what we see on a typical weekend at Devens. We’re used to long runways with slaloms, chicanes and technical sections. The national courses are designed on a wide open airfield. They make the best use of a large square format. This means they have lots of sweepers – something we rarely experience at Devens, and never the kind of 180 degree or greater sweepers at Nationals. Learning to drive sweepers fast requires the exact right entry line and speed for your car, the right apex, and the exact right exit to setup the next element. I need the practice to hone my game.

Then there is the surface. We’re used to tarmac. Nationals courses are on concrete. If tarmac is like a fine grade sandpaper, concrete is like a course grade. In other words, lots more grip. Which translates into learning to drive faster through every element. Which is fun squared. 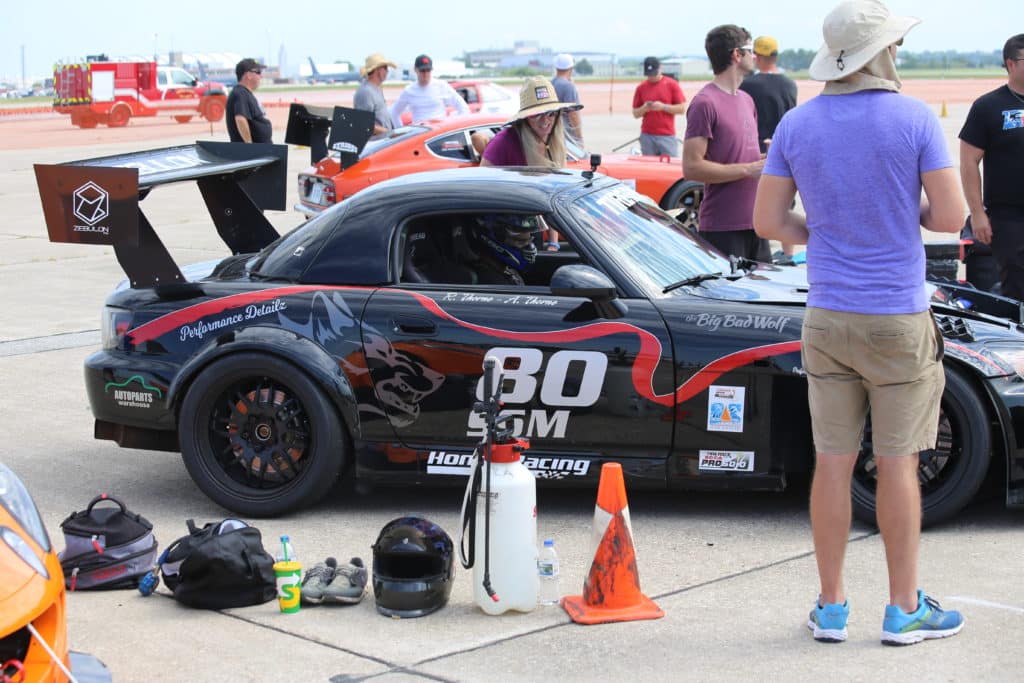 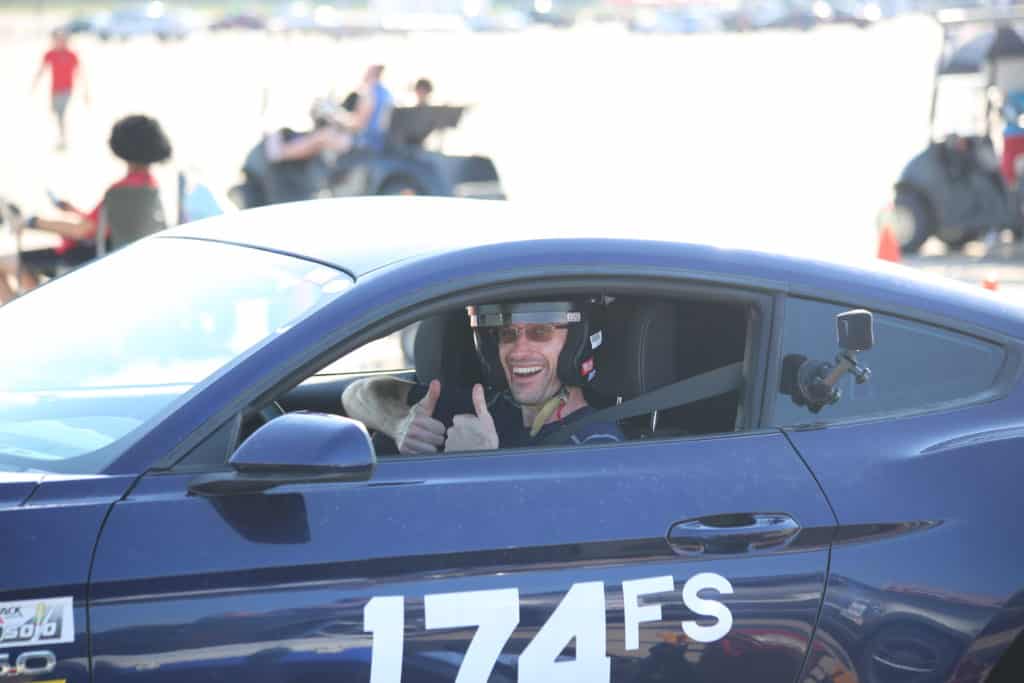 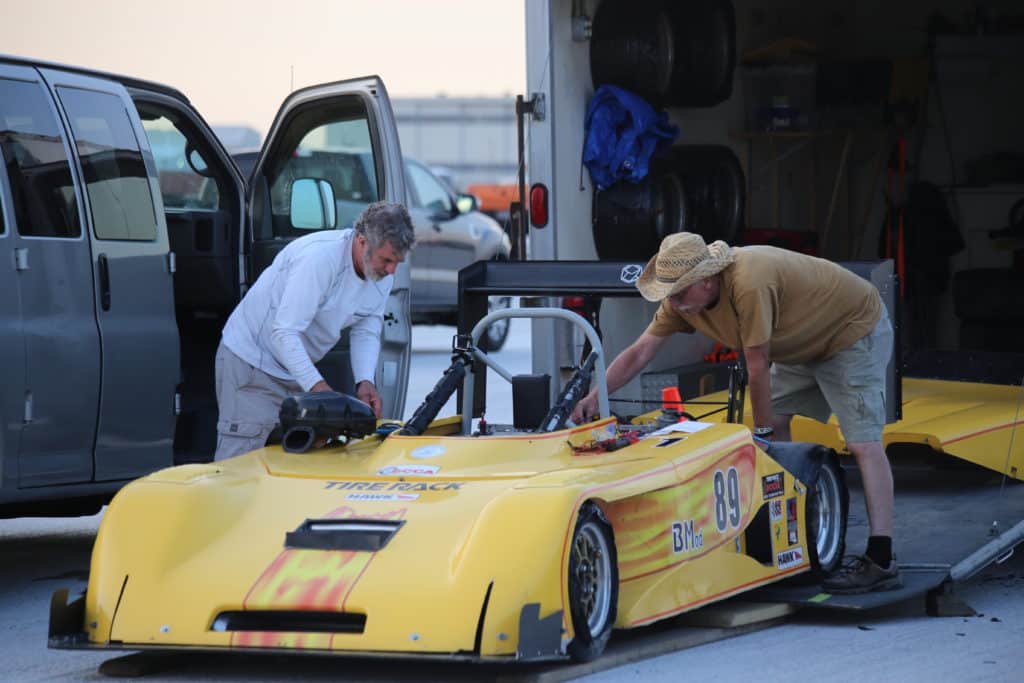 Beyond the courses, there’s the drivers. The talent on display at Nationals is the best in the country. We get the opportunity to put our skills up against the best of the best in our class. It’s humbling for sure, but also enlightening. If you’re driving stock, chances are other drivers will have the same vehicle so you also get to see how other drivers setup and execute. And the variety of modified cars on display is amazing. Drivers at Nationals are incredibly friendly and supportive. Competitors regularly offer up their cars to drivers who lose their ride due to some mechanical failure. The camaraderie on display is wonderful.

Each driver competes over two days, one course each day. Tuesday/Wednesday or Thursday/Friday. You have just three runs each day. The best time from day one is added to the best from day two to give a total time. This means you can’t win on day one, but you can lose. You need at least one clean run on the first day to place anywhere near trophies. In reality, in most classes you also need to be within at most one second from the leader. With one good run in the books (something I failed to do) you get to do it all again on day two for all the marbles. Or if you’re not close to be competitive, you get to enjoy it without any pressure.

There are ten run groups each day, running across two courses, five per course. Each run group has 30 to 40 cars plus dual drivers (typically lots of them). Single drivers can wait between twenty and thirty minutes per run, which can mean keeping tires warm on cold days can be an issues (many drivers want a co-driver to act as a tire warmer). But keeping tires warm wasn’t a challenge this year as Thursday was up in the nineties, with other days in the 80’s much of the day.

After last year’s washout, many drivers brought a dedicated set of rain tires. But with fine weather, I’m guessing they all went home with the same tread wear. But this year’s big deal was new Yokohama tires. After Pro Solo concluded the Sunday before Solos started, it was clear the new Yokohama tires could give between one and two seconds advantage in the hands of a skilled driver. This was a game changer in some classes. Even so, many of the stock classes happily competed on a mix of Bridgestones and BFGs. And it turns out many of those Yokohamas were already corded by the end of the week, making them pretty pricey per run. (Personally I’d like to see designated tires in stock classes to even the playing field some and reduce costs). 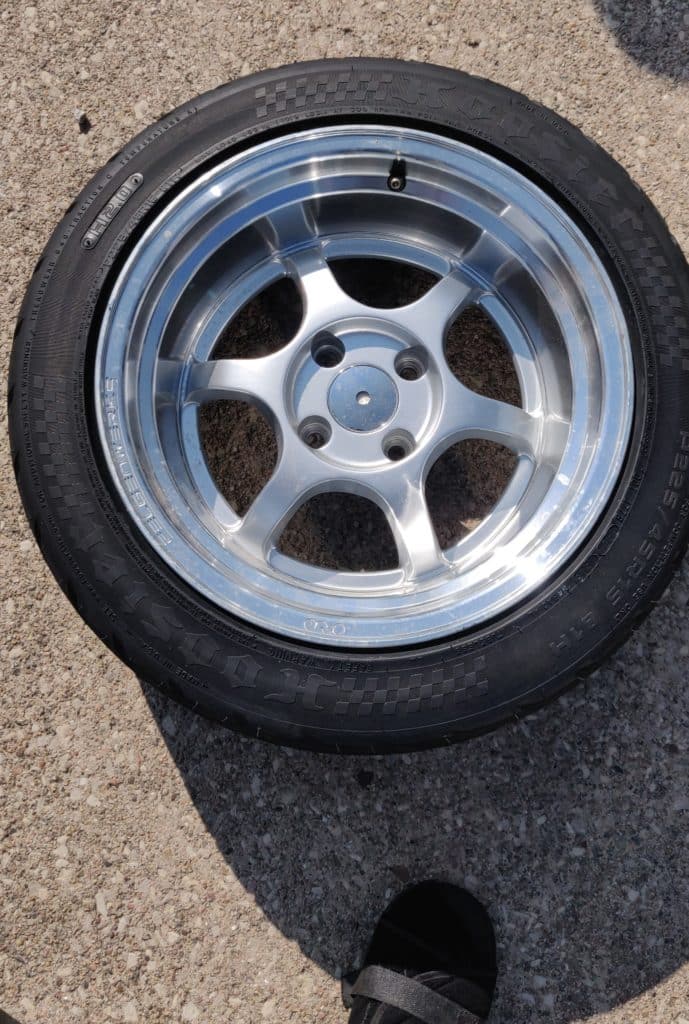 In my professional life, I get on stage in front of hundreds, sometimes thousands of people and don’t get stage fright. But the intensity of Nationals made me more nervous than I’ve ever been going on stage. Some drivers swear the difference between winning at Nat’s and placing out of first comes down to 90% confidence. I suspect this may be true only if your driving skills are at the top ten level. Outside that, skills and car prep count for quite a lot I suspect. But speaking for myself, even when I know deep down I’m not yet competitive, I can’t lose that deep seated desire to win. Even if it’s a slim chance, you have to be in to win. Other drivers can hit cones or just be having a bad day. When you’re on that grid, you have as much opportunity as anyone of winning. You just need to turn in the drive of your life. It’s an adrenaline rush!

Now I know this will sounds like a fishing tale, but my third run on day one was awesome (not trophy awesome, but awesome for me), except this is Autocross. And the Autocross gremlins got into the timing computer and I had no time for that run. Still a rerun is a gift, or it should be … unless you cone it! Oh well.

The second day East course was either horrible or awesome, depending on which 50% of drivers you asked. I was in the awesome group, though this may have been because I wasn’t in contention and could simply enjoy the driving. But that’s all part of the fun of Nationals. (I’ve also learned that to be competitive, you need to be studying video of the course from the earlier heats as well as other driver’s SoloStorm data. I learned this on Friday night so maybe next year!).

Our region did rather well, with a bevy of National Champions once again. Congratulations go out to Billy Davis (CSP), Grant Reeve (SSR), Tamra Hunt Krystinik (DSP) and Lana Tsurikova (ASL). I feel a special shout out is warranted for Tamra, who won the open class. I hope her brilliant driving encourages more young women to get into the sport.

But the competition is only part of the fun at Nationals. 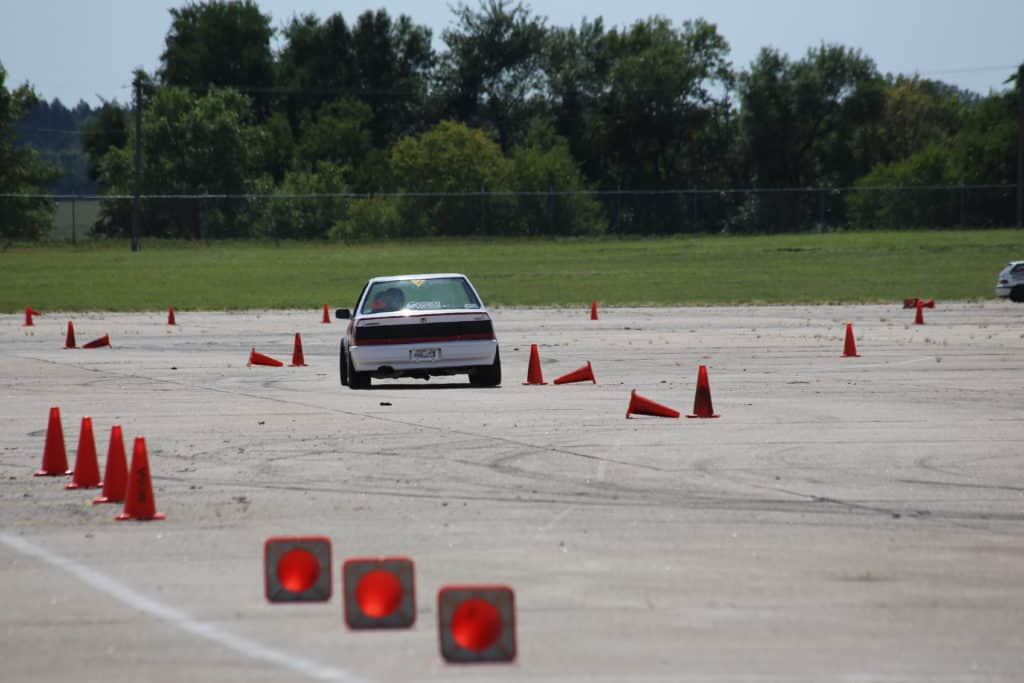 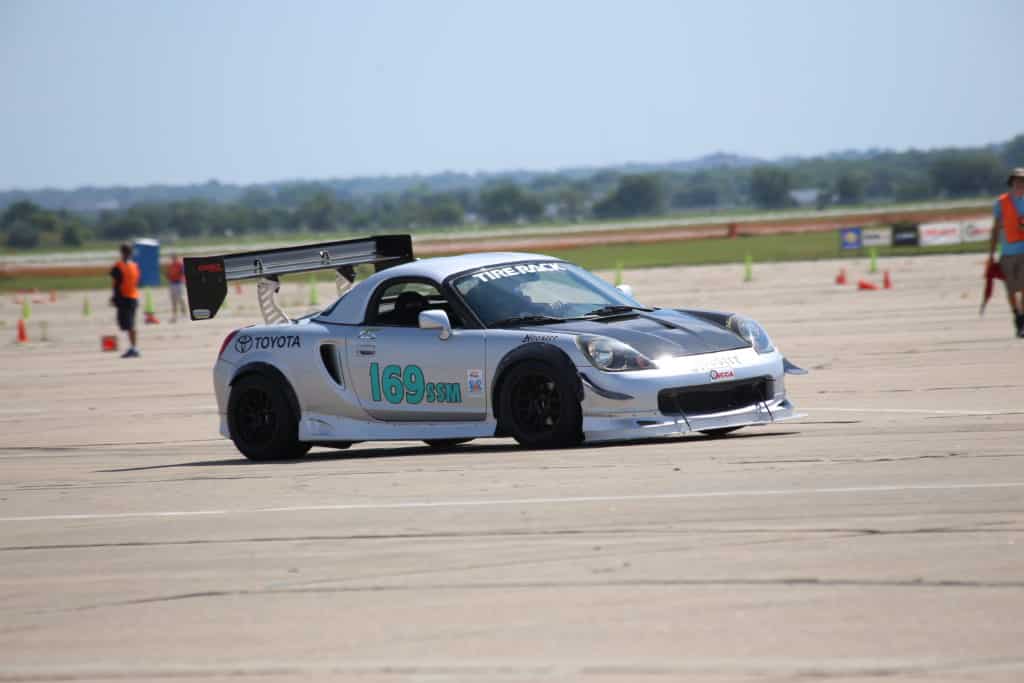 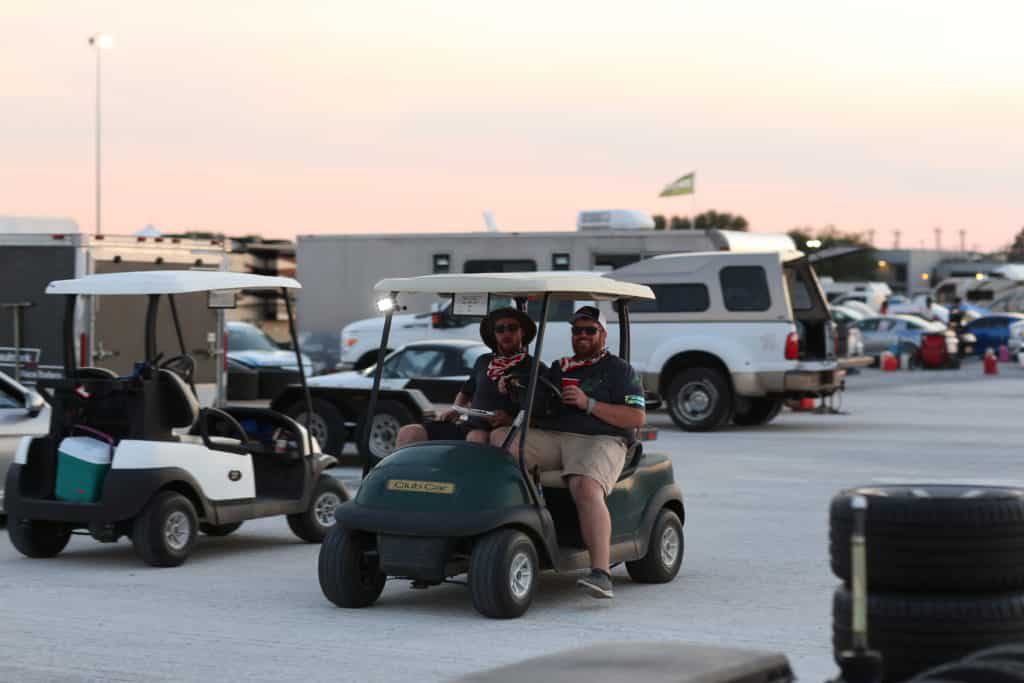 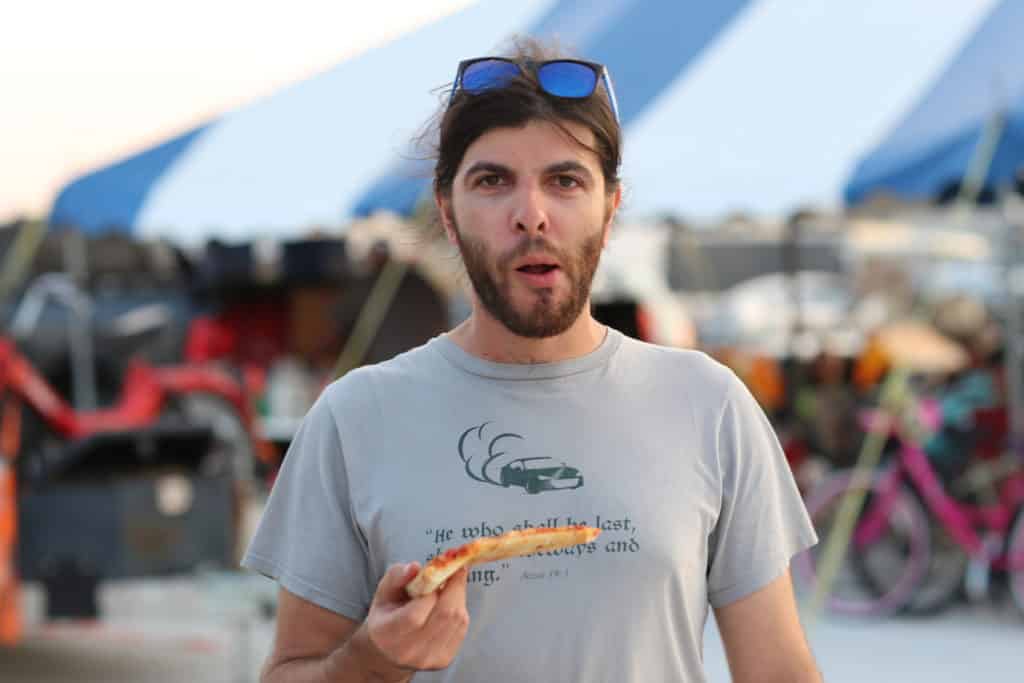 There’s a bunch of social activities happening during Nationals. NER region had a casual pizza night on Tuesday – BYOB. Alex took lots of photos! And one of the social highlights is the Monday Talent and Tacos event. The tacos and beer were excellent (courtesy of our very own Josh and Stacie and a bunch of volunteers). The talent portion of the evening seemed a little more questionable to me. But I applaud everyone who was willing to jump on stage to demonstrate their talent. I’m not sure who won in the end … I was distracted by beer and friends. But that kind of sums up Nationals. I’m not sure how many times I heard someone say “People come for the competition and stay for the family” but it’s a refrain heard repeatedly. I have no doubt this is the reason so many drivers come back year after year even though they have yet to win a trophy.

About the Author: Nigel Fenwick