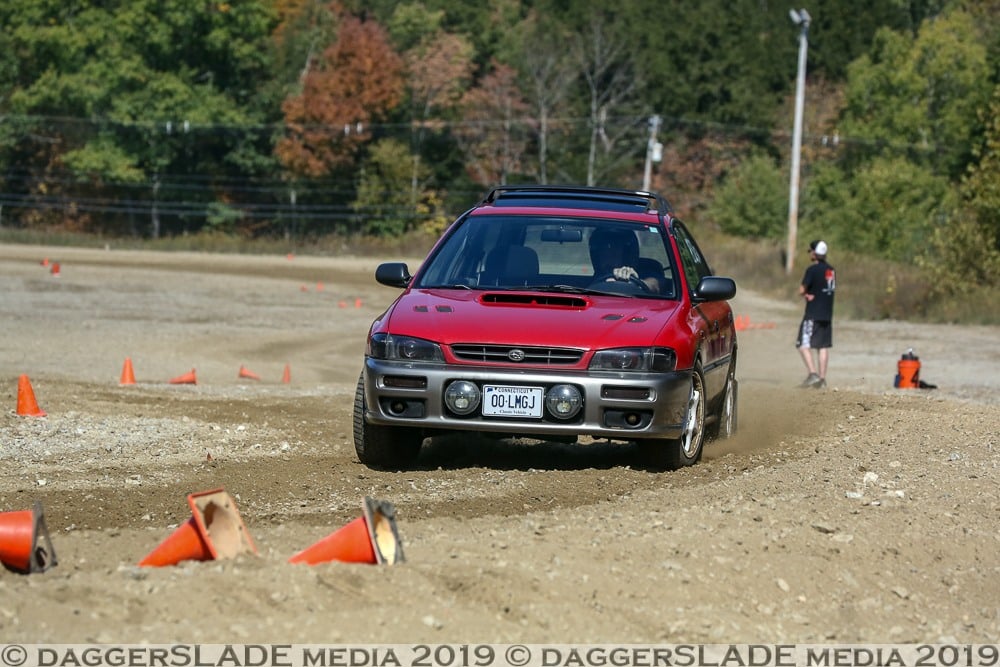 View all the Okemo Photos by DaggerSLADE Media here.

Much like the later seasons of The Sopranos, Breaking Bad, and other great TV shows, the NER RallyCross group splits the yearly competition schedule into two half-seasons: the first running from January to May and the second from August to December.

And so, for the first episode of Season 2019b, we return to the venerable Blue Lot at Mt. Snow. With 78 drivers registered, course workers had their work cut out for them, calling cones, adjusting the course, and keeping an eye out for big, oil-pan-killing rocks (more on that later). Even though Mt. Snow is one of our smaller venues, there is luckily enough space for fast sweepers, open straights, and tight, technical slaloms and bridges. There’s something for everyone.

Starting off with Stock Front, the continual battle for primacy burned ever on with Austin O’Brien in his 2003 Lancer ES and Chang Ho Kim in his 1995 Del Sol, each running very close lap times in the morning runs. In the afternoon, however, O’Brien pulled ahead, and finished with a 3.5 second class lead. In third place was Kim Hapgood, (also in the Del Sol) who turned some extremely respectable times in the afternoon, trailing Chang by 2.7 seconds.

In the Stock Subaru class, the competition was equally remarkable: Rob Tessier in his Subaru A4 ultimately took the win, besting Kevin Andrew in his Subaru Outback by 3.2 seconds. In the same Outback, Charlie Farmer duked it out with David Bosquet in his 2017 WRX, taking third place by a mere 0.118 seconds overall.

Moving on to Prepared Front, one would first notice that the two cars accounting for the class couldn’t be more different: Amy Alton in her now-multi-colored 2006 Audi A3 against John Stanwood in his 1988 VW Scirocco. The two traded spots throughout the day, but a few cones in the end of the day cost Stanwood the trophy, with Alton’s virtually clean day runs giving her the win.

A 12-driver delegation represented Prepared AWD at Blue Lot, and as always, the rivalry was exciting to watch – especially with some notable deviations from the formula present this time around. John Hart brought out a bright-red Audi 4000 Quattro, and there were a whole three entrants in AWD E30s. Ultimately, Hal Denham and his extremely quick Audi TT took an 8-and-change-second lead, running cone-free for all save one final glory lap. Battling for second were Alex Merkuryev and Nikolay Nemchuk, co-driving the 2005 Impreza wagon, with Alex taking it by a margin of just under two seconds.

With 80% of the class being Volkswagens, it may be worth officially renaming Mod Front to Very Fast Volkswagen class. Here, we see Scott Carlson in his Half Fast Golf take a very close 2 second win, with three whole cones hit in the morning. Following, Jesse Whitsell brought back a favorite – his cammed 1995 VW ABA Golf – and turned some extremely quick laps, leaving an almost ten-second gap between him and third place. Next, in a (you guessed it) 2006 VW Golf (technically a rabbit) were co-drivers Grant and Stephanie Reeve, each contending for the third spot on the leaderboard, with Grant taking it by 8 seconds.

Notable mention should be made for Benjamin Nadeau and Anthony Burden, both driving a tiny 1992 Jetta with a Big Turbo – unfortunately, the car did not make it through the full event, though it did sound extremely cool!

With big, dramatic slides, huge diversity in cars, and opposite lock, opposite lock, and again opposite lock, Modified RWD was a lot of fun to watch as always. Daniel Kubec in his NB MX-5 laid down an extremely impressive, cone-free day, besting Vaughn Micciche in his Porsche 924 by just 0.23 seconds, the latter’s three cones standing between his raw times and first place. 18 seconds behind Vaughn, also flying the banner of “Miata is Always the Answer,” Carmen del Genio took 3rd place, and bringing up 4th place was Lazz Mckenzie in his 1988 MR2.

It was in Mod Rear, then, that Blue Lot demanded a sacrifice to the rallycross powers – and just like in June’s event, it was another E30. The ’91 318is (piloted by yours truly and Alex McCrady) had an oil-pan-and-boulder collision event and was down for the count. Luckily, the powers of JB Weld restored the car, and Alex Twombly (with his Prancing Moose Volvo 240) and Jason Leaming (in his bright orange Superb Eetle) lent the two now-on-foot drivers their vehicles to keep the day going.

Finally, we get to Modified AWD – the craziest, most populous, and fastest class, with intense competition and continual surprises. Blue Lot, of course, was no different. In a dramatic victory, Tony Gearhart in his 2004 Subaru WRX STI took both first place in the class and FTD with an overall time of 310.7 seconds, knocking down one cone in the process. A mere 2.4 seconds behind him was Emmanuel Cecchet, driving his own 2004 Subaru WRX STI. 1.3 seconds behind, Robert Bean came in third place, driving a 2000 Subaru Impreza, laying down impressive and clean times throughout the day. Separated by a mere 0.7 seconds, Chris Regan, behind the wheel of his signature Mazdaspeed6, arrived in fourth place.

After all the dust had settled (both literally and figuratively) it was nearing 6:00 PM, and after a long, hot, and dusty day, we were all ready to hit the road. Thankfully, many were able to stick around for the awards after the event to celebrate the wins of the day and share good laughs with one another. And after the course had been picked up, bus loaded (Thanks again Jacob Perkins!!) and the awards given out, our friendly group of rallycrossers picked up and headed home.

See you again soon at Canaan for the Joker Lap!

About the Author: Sam Aleksanyan